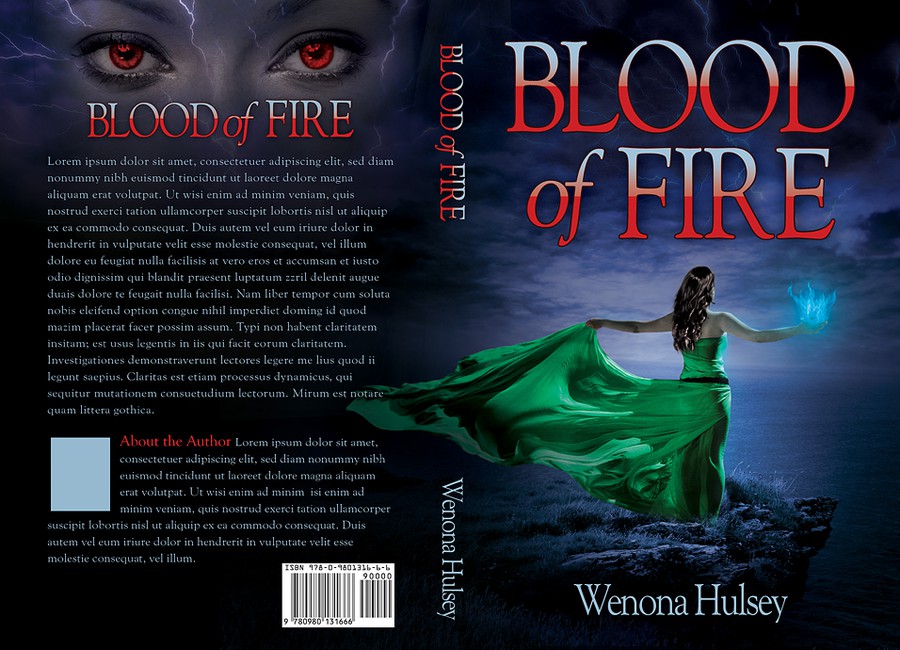 Design the cover for the Final Book in the Blood Burden Series by Wenona Hulsey, Author 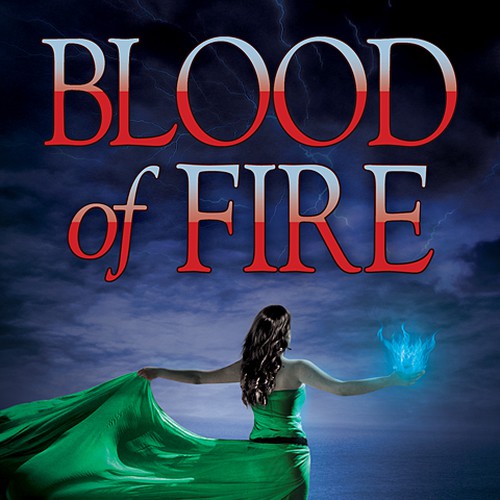 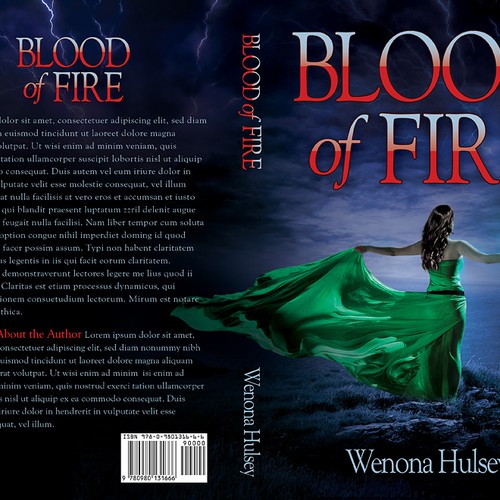 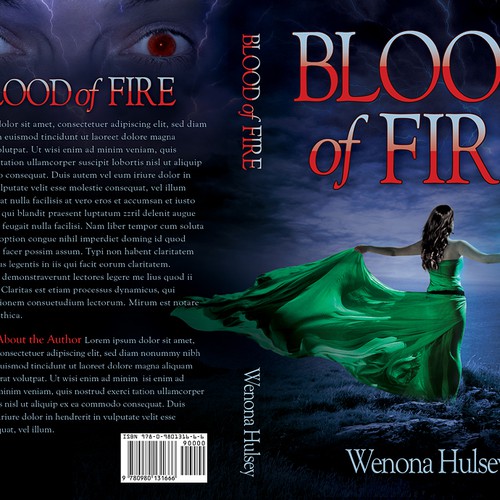 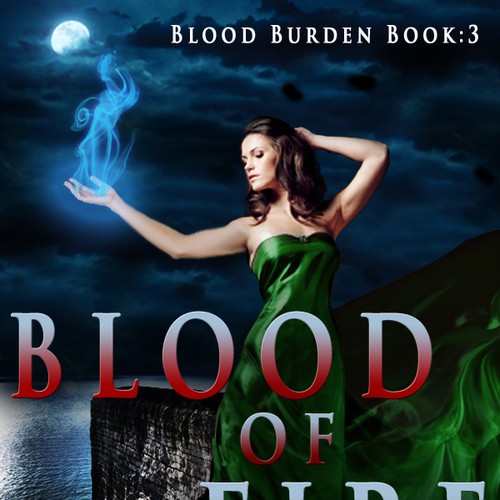 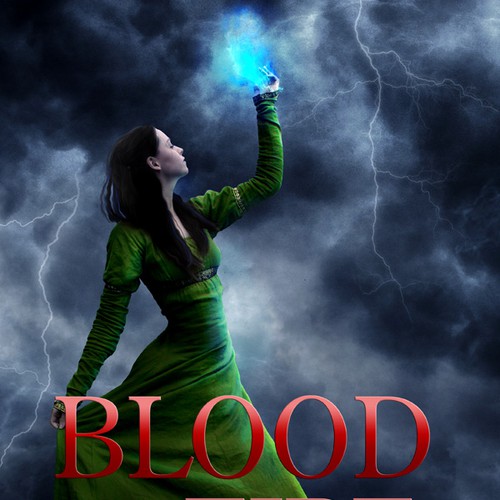 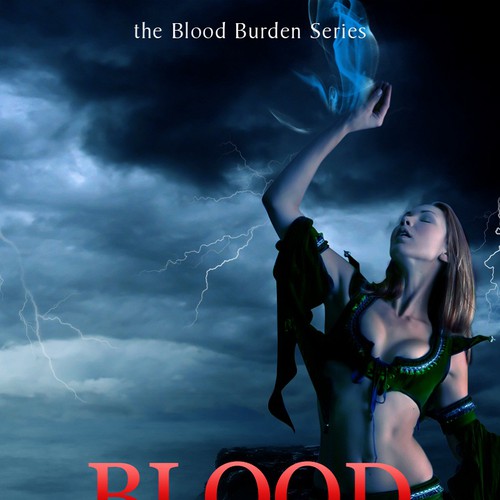 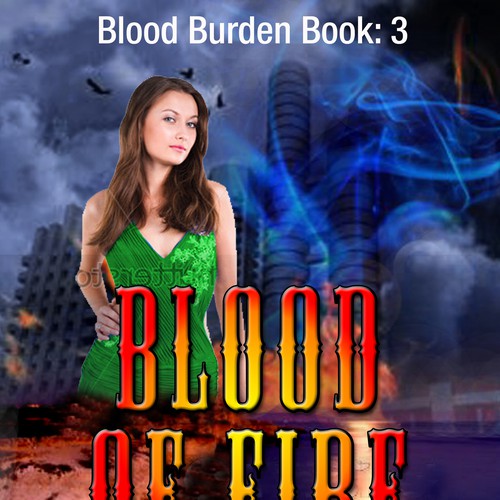 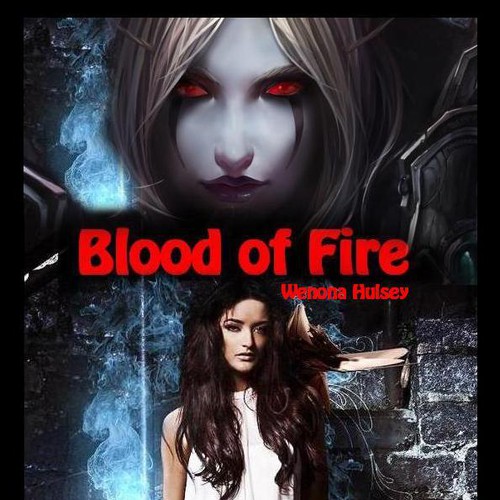 I'm a Paranormal Romance/Urban Fantasy author in need of a great book cover.

I need someone to design my ebook and print book cover for the 3rd book in my series. Blood of Fire. I want it to be similar to the first 2 books where it is dark and ominous but I want this one to feature just the main character.

I have a scene in my head where she's standing on the edge of a cliff wearing an long green velvet dress, looking across the sea with her hands held out at her sides with bright blue flame engulfing them. (she controls fire). Dark storm clouds are rolling in.

This final book in the series is about Nicole coming to terms with who she is (powerful fay/warrior mix) and stepping up to stop a war between the two breeds. She needs to look powerful and beautiful.

Nicole has waist length curly brown hair, blue eyes--unless she is using her power then her eyes turn red---athletic build with fair skin.

The man who wants the war to happen has been represented on the first cover with red eyes. This may be an option to work into this cover to.

I will need a photo shop file for both the front of the cover and also one for the print version of the cover with all layers attached.

Logo that makes you want to find out more.
269 €
Its a certificate or trophy given to someone who you believe is a one in a million type of person.
68
entries
9
designer graphistes
Leather Goods Start-up Logo
299 $US
Start up leather goods company that produces handcrafted wallets, cases, covers, etc.
60
entries
13
designer graphistes
New logo design for a woodworking and design business
299 US$
We make custom wood signs, home decor, and furniture - ranging from newborn baby signs to dining tables. We also incorpo
24
entries
10
designers
Clean, Elegant Logo for Custom Art Company
299 USD
UPDATE: We would like to use our full business name of "Evolution Art". We create unique works of art for display in hot
127
entries
41
designer
A doctor started a pottery business.....
299 $
I am a physician who has started a ceramics business. 901 is the area code for Memphis. my current logo incorporates a
49
entries
16
Designer
The Newcastle Design Company
299 USD
Home design services
36
entries
6
designer