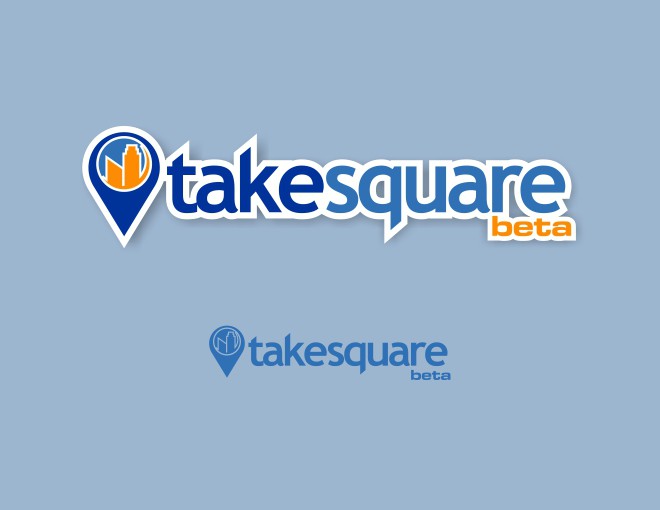 Create a logo for Takesquare, a geolocalized web game 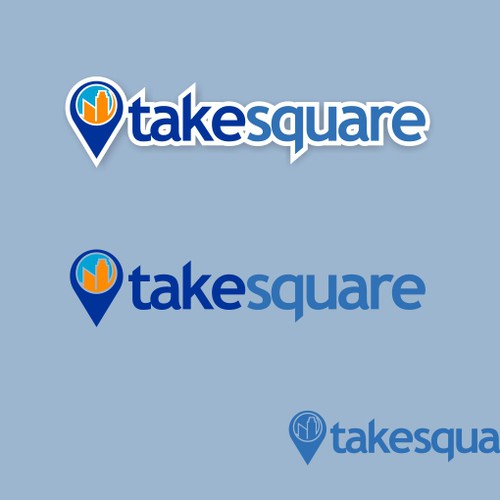 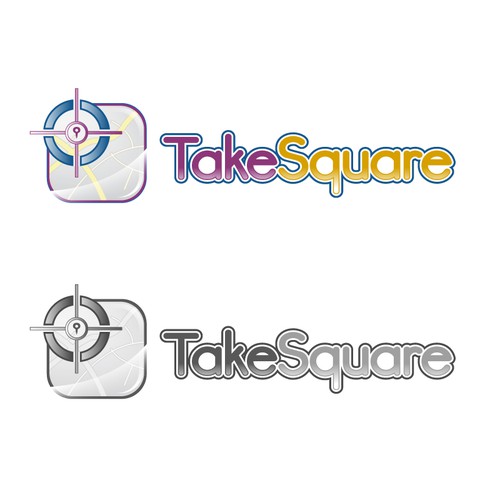 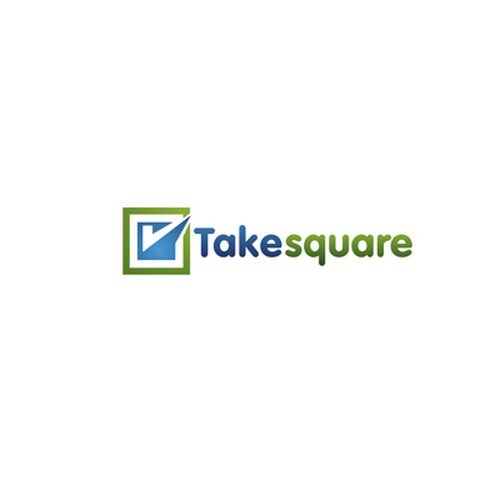 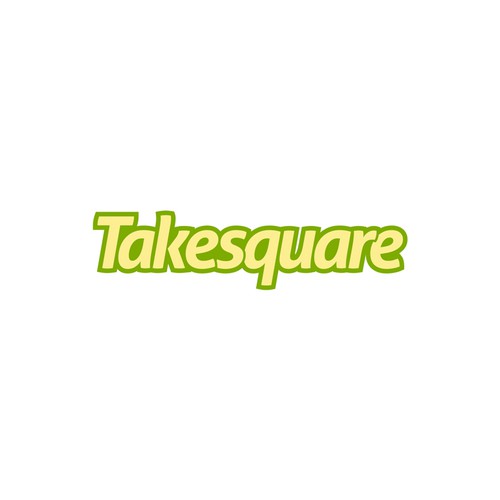 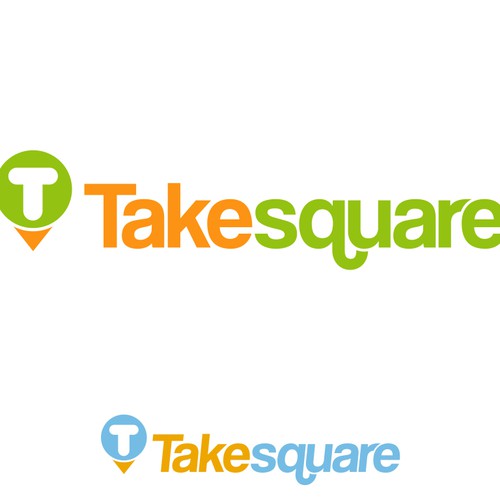 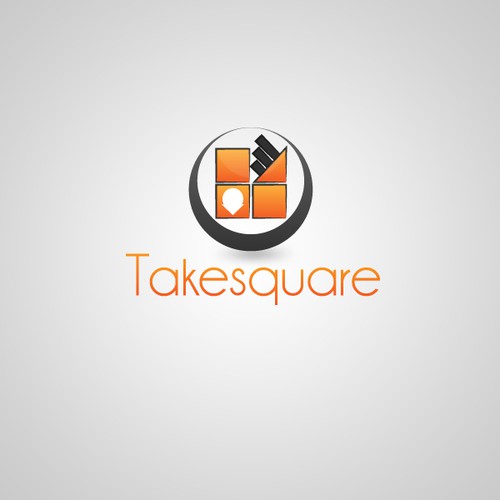 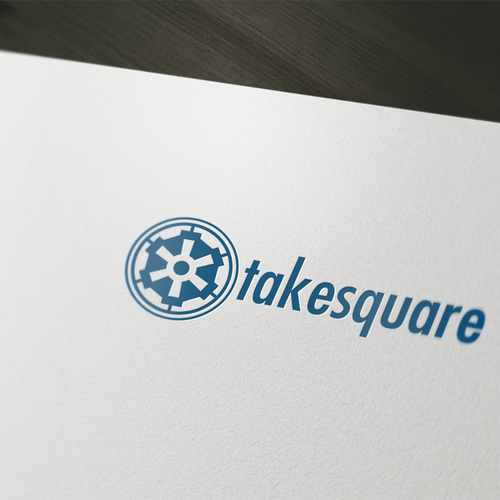 Takesquare is a geo-localized web game based on Foursquare venue data & check-ins. It takes the concept of "mayors" and expands it, making the world a "global stock market" where players can buy shares from venues around them by check-in and profit from their revenue. Players are encouraged to compete against friends to dominate their cities, and "attack" other players properties by a variety of power-ups that can be earned or bought. It is kind of "Monopoly meets Foursquare".
Its target audience are users of gps-enabled smartphones, accostumed to geolocalized apps like Foursquare and Twitter, but at this time it is NOT an app, it relies on users having a Foursquare or Twitter app in their phones, and coming back later at the website to make their strategies and manage resources.

The name is obviosly a play on the "Foursquare" name, as does many apps heavily based on them, and I'm a big fan of their logo and style - but that being said, the logo should not resemble theirs, as this project is not endorsed by them, and having "square" on the name is already being to much alike. The "current" site logo is a mockup, made just for layout positioning.

The Takesquare.com site is already live, but in a very alpha stage. The game works in the San Francisco Bay Area, so I encourage designers to register and have a feeling on the game mechanics. Layout and game features are being added daily. Just check in somewhere around SF with your Foursquare app and you'll see companies' shares you gained when you refresh the map page.

The site's colour pallete is from a theme template, which is almost the same from Foursquare - pretty nice, but the resemblance is undesired. I have no color preferences for the logo, and I intend to change that blue background to one that matches the winning logo colors. However, do note that the logo must fit in a colored background, just like it is now.

On the logo type, I do want it to be a "word mark", as I feel one as such would fit well in the current planned site layout, but I'd love an accompanied image along with it. Most of the "word marks" logo I've seen here in 99designs come with one, so designing one would definitely be a huge plus on selecting winners.

Please note that I require the winning design to be hand over in a format that allows me to scale it up or down. A pure vector image would be best, but not strictly required.

Design a logo for a new affiliate company that shows thrust
7 899 NOK
456
entries
138
designer graphistes
Game Store Logo Redesign
669 CA$
We are a unplugged game store established 2010, specialising in miniature games and supplies, board games and trading ca
95
entries
24
designer
New toy logo!
399 CA$
SCRAPPIES are stuffed animals made from mixed and matched pieces of fabric. Age target is 3-12 years.
28
entries
5
Designer
Help us refresh our Association Logo
AUD 399
The South Australian Bridge Association welcomes Bridge players of all levels to our sites across Adelaide. We pride ou
48
entries
14
diseñadores
Create a Logo for a Bike Rental Business
$299
Bike Paso is a bike rental business in Paso Robles, California USA. The business is looking to target tourists visiting
101
entries
21
デザイナー数
A logo for FUNGREDIENT, the essence of fun selling boardgames and cool toys
299 $US
We sell boardgames and non-conventional toys. We divide our audience in two: retail (people who expend money on hobbies
38
entries
7
designer graphistes

Comienza ahora
we need a logo for our gaming peripheral business!
299 $
We sell gaming peripherals, specifically to console (xbox/ps4) gamers.
117
entries
14
Designer
Tuqirism Games Logo Design
709 £
Indie Computer Game development studio. Based in London. Making games based on Muslims and South Asians, although hop
177
entries
12
Designer
Gamification app for city exploration needs a logo
€269
City Challenge is an interactive real-world game that enables players to explore cities in a new and interesting way. It
38
entries
18
デザイナー数
Design an exciting, modern logo for a brand new Escape Room in NZ
AUD 400
We are an escape room business, where people pay to be locked in a creatively themed room where they have a limited amou
79
entries
9
diseñadores
Design a fun mascot to appeal to hiking enthusiasts!
CA$399
We rent outdoor equipment, such as tents, sleeping bags, backpacks, snowshoes, beacons, etc. We rent to both tourists an
27
entries
10
デザイナー数
Game logo for Rocket Arena game
US$ 299
Arena First Person shooter with a focus on big destruction with rockets. Think rocket launchers and Quake 3 Arena.
14
entries
9
diseñadores