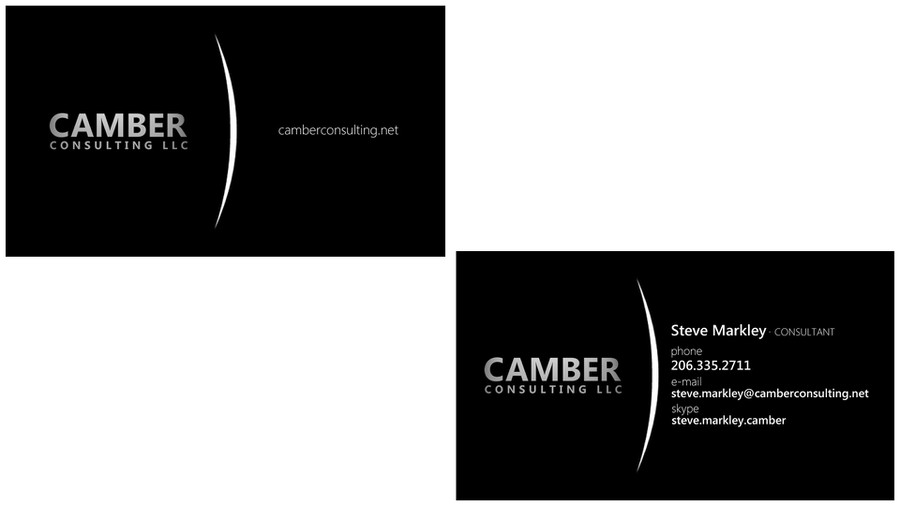 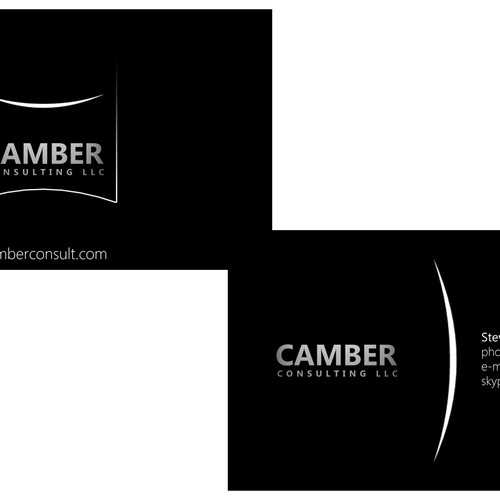 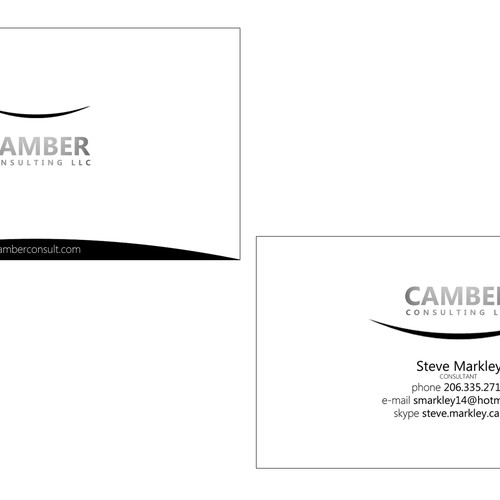 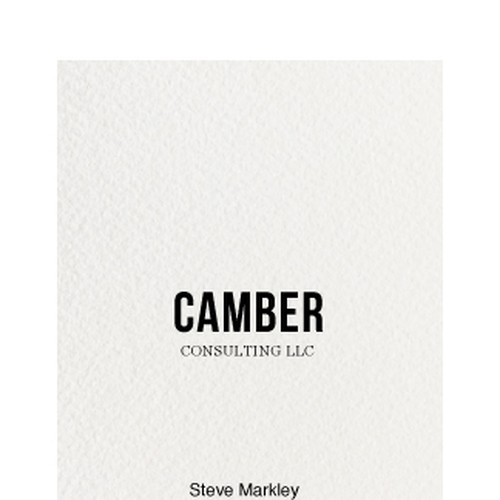 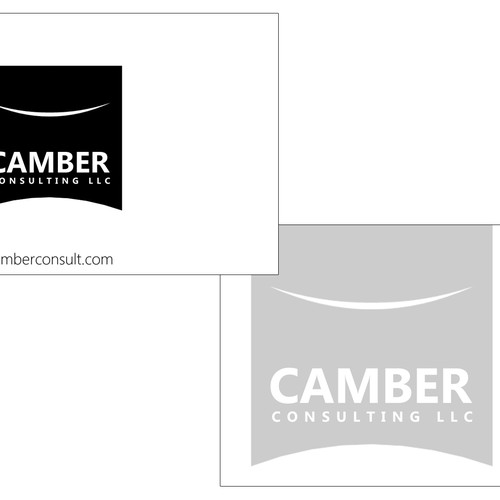 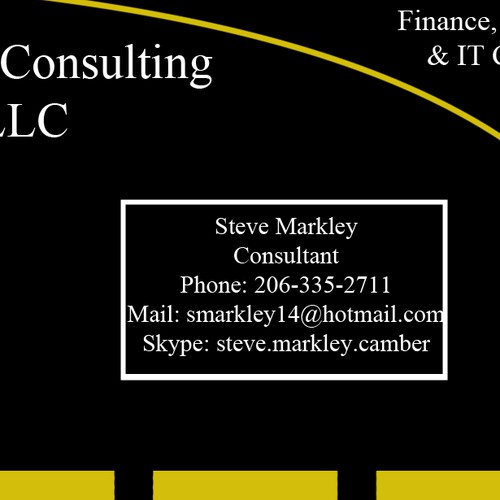 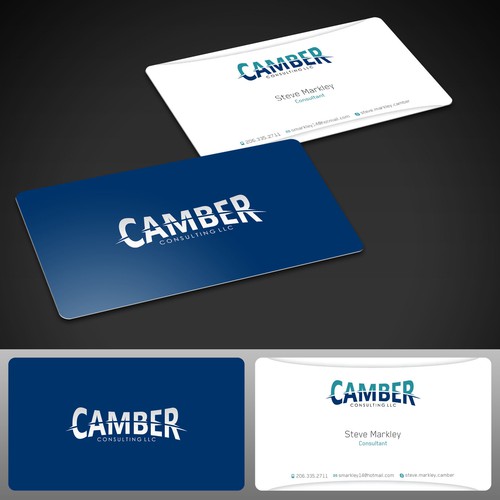 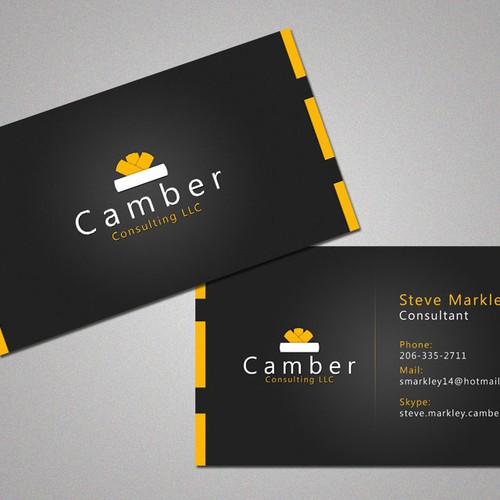 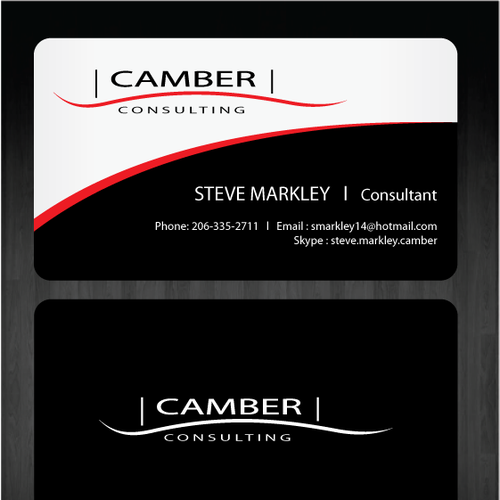 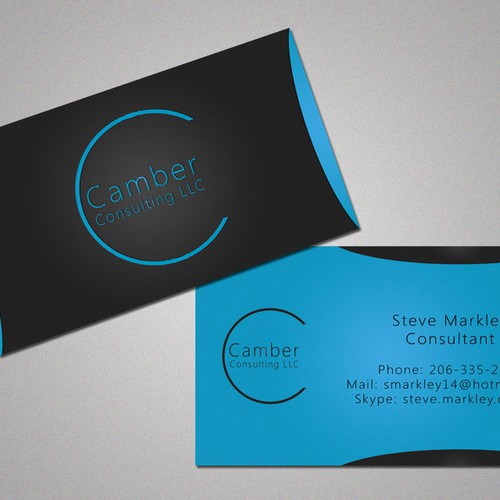 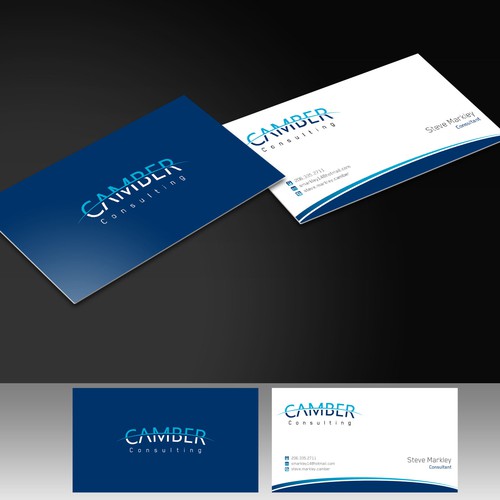 Finance, Accounting and IT consulting services to large and medium size technology enterprises.

I'm looking for a professional but creative design to communicate an established, competent, creative and resourceful service provider. Card and design should include the company name and basic contact information:

Possible ideas that I think could be cool in the design relating to the word Camber:
Camber is an unrelated word to what I do; I have run across it in some of my hobbies, and just liked the idea and that it describes a relatively common and important idea for these hobbies, but it's not frequently used. It has several meanings but I've seen it used for the shape of a ski and for the angle of a road in bike racing. I work with a lot of the same people year after year, and I think that they would appreciate that I've incorporated some of my personality into my work, and I'm hoping that it would be something interesting to talk about with new customers.

More on Camber:
What it means in skiing - If you were to imagine skiing and looking down at your skis when you pushed them as close together as they can go while the flat surface is still maintaining contact with the snow, the skis would likely touch at the ends of each of the skis, but the shape of the ski bows out away from each other toward the middle. This bowing is referred to as the camber and dramatically impacts the performance of the ski.
What it means in bike racing - In cycling, camber is the angle of the road, and this is important when the road is angled around a curve. If the road is slanted away from the direction of the turn, it's a weird balance for the cyclist and he needs to slow (known as "off-camber", whereas if the road is angled in the same direction as the turn, the rider doesn't need to slow down through the curve and can even accelerate. (Similar to a berm in bmx or mx.)

A couple of thoughts that I had for this:
- skiing - the business card actually is cut out at the top and bottom to represent the shape of a ski.
- skiing - similar to the above, but insted of cutting it out, the shaping would just be from color. That is the card would be white but the shaping would be created by coloring.
- Road racing - an angle of road with visible yellow stripes. I would want it to be suble, so that at first glance it's just a cool design, but after describing what camber is, there's an "oh, I see, that's a road..." moment.

Font:
I love Segoe UI in all caps, but not a requirement.

It's not a requirement that the design include these ideas, but I'd like to be able to talk about the design and related it back to the true meaning of the word.

Demographics: well educated finance and IT professionals who appreciate creativity but are generall concerned about experience, competence, and ability to deliver complex, high priority projects.

stationery for weichselbaum comconsult
$295
weichselbaum comconsult is a small consulting company with a focus on the telecom industry
143
entries
20
designers
New business cards and presentation folder design for Stafflink
295 $US
We are a technology staffing company
114
entries
20
designer graphistes
Tindr.co needs a new stationery
295 $US
We are a software development shop specializing in strategic product assistance for startups and established companies
55
entries
16
designer graphistes
Business card for exciting software company (constant feedback and ratings. PM me with any questions)
US$295
We provide software to small businesses to promote their own offers and coupons
279
entries
51
designers
stationery for GlobalTech
A$299
75
entries
17
designers
stationery for Code Drop
A$299
112
entries
26
designers